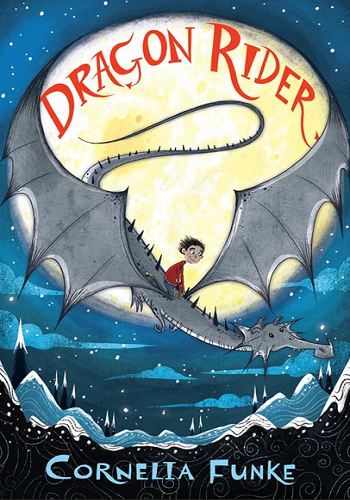 A series by German author Cornelia Funke, in which the first book (Drachenreiter in the original German) follows a dragon, a Brownie, and an unassuming human orphan (and eventually a few more partners) as they travel from one end of the earth to the other searching for the Rim of Heaven — the only true sanctuary left for the dragons, now that humans are building over all the others. On the way, they'll encounter an assortment of magical creatures both good and bad and travel through exotic locations, all while trying to keep themselves out of reach of a very persistent beast with a hunger for dragon flesh.

The sequel, The Griffin's Feather (Die Feder eines Greifs) picks up the story two years later. The dragons and the brownies are happily settled in the Himalayas, while Ben and his adoptive family are now living in Norway and working at a sanctuary for endangered magical creatures. Life hasn't worked out as smoothly as intended for anyone, particularly Ben, who dearly loves his new family, but misses his dragon friend Firedrake. But everyone has new difficulties to deal with, when the problems of hand-rearing Pegasus foals send Ben and his father across the world in search of griffins.

A third entry in the series exists in the form of an audio drama, The Volcano Mission, which has only been released in German so far. It picks up not long after the second book. Ben and his family receive various reports of fantastic beings disappearing all around the world, with Sorrel having a nagging feeling that Firedrake has fallen victim to it, too. When a "photomeleon" appears and reports that she had been kidnapped by a human, who is reponsible for the other disappearances as well, a scouting team consisting of Twigleg, Lola, and Sorrel is sent out to investigate.

A CGI animated movie based on the first book, Dragon Rider, was released in 2020.