Literature / Dreams Of The Dying 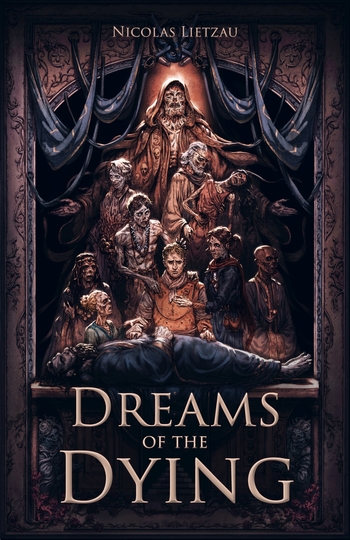 Cover of Dreams of the Dying's 2020 Revised Edition
You can't run from your own mind.
— Unknown

Dreams of the Dying

(German: Träume eines sterbenden Gottes, "Dreams of a dying God"), part of a larger series called Every Day Like the Last, is an ongoing fantasy and horror Web Serial Novel set in the Vyn universe, the world of the total conversion mod Enderal. It's penned by Nicolas Lietzau, who also wrote the story of Enderal and explores the past of Jespar Dal'Varek, one of the game's protagonists. Though it's set in the same universe, the book doesn't require knowledge of the game.

Set eight years before the events of Enderal, Dreams of the Dying follows Jespar to Kilé, an ultra-capitalistic island nation. Due to a controversial decree that essentially privatizes every bit of land, it's on the brink of a civil war, spearheaded by a terrorist organization called the Scythe.

Jespar himself, plagued by PTSD-esque nightmares, learns that he has been hired by the island's most powerful merchant king's wife herself and that her husband has fallen into a magical coma of unknown origin, putting the already fractured stability of the archipelago at great risk.

Together with a traveling healer called Lysia Varroy, Jespar is tasked to find Kile's last dreamwalker - a psychic capable of entering another person's dream - in order to enter the merchant king's mind and find the reason for behind his curse.