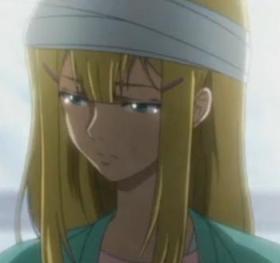 "I'm sorry, Saji. You went to the trouble of buying these for me. And they are so beautiful . . . but I can't wear this ring."
Advertisement:

Like other Gundam series, Mobile Suit Gundam 00 is a story about war and terrorism. Both major and minor characters suffer through loss, trauma, and even die themselves over the course of the series, leading to many heartrending moments.