Film / White: The Melody of the Curse 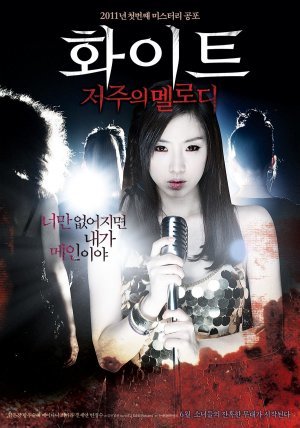 After losing a televised competition to the largely more successful idol group Pure (played by actual K-pop group After School), the members of Pink Dolls move into a new studio to create their next hit, which will hopefully sky-rocket them to the top. Eldest member Eun-ju discovers a tape in the studio entitled "White", which turns out to be an old unreleased music video that her manager thinks might have the right moves and addictive tune to pave the way for the group's success. Since the rights to the song are unknown, the copyright issues are sidelined and their manager gives the okay for them to begin deconstructing the video for their next performance. They perform "White" on stage, becoming an overnight sensation and with the rise in popularity.

However, tensions begin to rise within the group as the desire to become "The Main" corrupts each member, and strange, horrifying things begin happening around the group. And there's something...something creepy, about the tape...

Notable for being an Affectionate Parody of the K-Pop World and industry, splashed with a healthy dose of Nightmare Fuel to shake things up. Oh, and having half the cast actually be in K-pop groups.

White: The Melody of the Curse provides examples of: