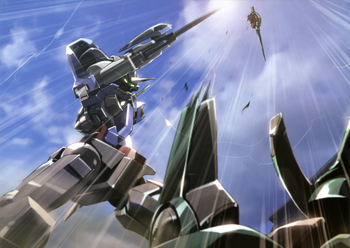 From this moment on you knew the series would be awesome.

"All right, let's get started! This is a war between Gundams of epic proportions!!!"
—Ali Al-Saachez summing things up.

Because whether you admit it or not, the Anno Domini timeline did go out of its way to be awesome... which is quite appropriate for a story that ends with saying "The childhood of humanity ends."