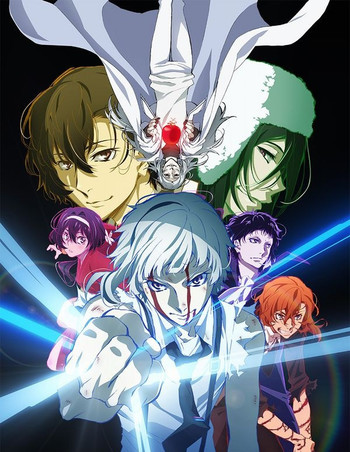 Don't turn your back on the troubles you're facing.
"Lost, fighting, crying. Because I wanted to live."
Advertisement:

Bungou Stray Dogs: Dead Apple is a feature film for the 2016 manga/anime Bungo Stray Dogs. It fits the gap in between the Guild Arc and the Cannibalism Arc and is as such a continuation of season 2 of the anime and serves as a prequel of sorts pertaining to the third season.

Late-Arrival Spoiler Warning: Everything below this section will have unmarked spoilers for the original Bungo Stray Dogs anime and eventually, the manga. If you have not watched the anime and do not want to be spoiled, do not read this page. Many examples on this page are shared with the anime. All spoilers may ruin your enjoyment of the story. Again, avoiding these pages is highly suggested for those who have not seen the show. YOU HAVE BEEN WARNED.

Yokohama is once again in danger as a mysterious mist enters the city. People disappear, only leaving Ability-users in the town. Atsushi and Kyouka try to find out what happened when they suddenly get attacked by their own Abilities. Could the mist be the cause of this, and who is behind this? Things get heated up when they discover Dazai has seated with the enemy.