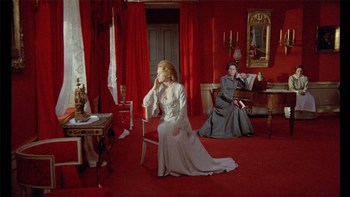 "It is early Monday morning and I am in pain."
— Agnes, in her diary
Advertisement:

Cries and Whispers is a 1972 film directed by Ingmar Bergman.

This Bergman movie is set in a vague time frame that seems like the latter 19th century. Sisters Maria (Liv Ullmann) and Karin (Ingrid Thulin) have returned to their old family home, to stand vigil at the deathbed of a third sister, Agnes (Harriet Andersson). Maria and Karin both have husbands but the only other main character is Anna (Kari Sylwan), the family maid, who cares tenderly for pain-wracked Agnes. As Agnes suffers through a slow and painful death, her sisters go through their own emotional crises in which they confront their selfishness and inability to love.

Only the third foreign-language film to receive an Oscar nomination for Best Picture, losing to The Sting. Distributed in America by none other than Roger Corman.