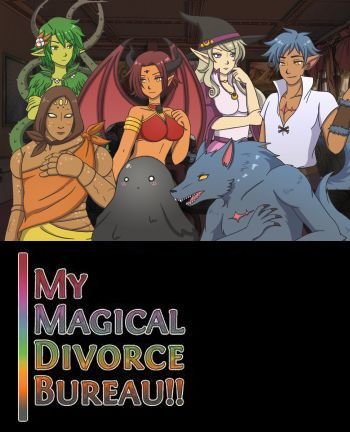 My Magical Divorce Bureau!! is a short Visual Novel. As its title suggests, the game has you operating a divorce service for members of the supernatural community. In each case you deal with, the marriage was established without one of the parties having agreed to it — and since that's obviously not supposed to happen, the dissolution of the marriage is a foregone conclusion. If you say the right things, however, you also have the opportunity to address the underlying issues which gave rise to the situations in the first place.
Advertisement:

You deal with three cases in the course of the game. The characters seeking divorces are Baird the werewolf, Lillum the demon, and Po the blob. The characters being divorced are Jeska the witch, Lexis the golem, and Nerium the dryad. However, the pairing of victims and villains is randomly determined for each playthrough, creating nine distinct possible cases — to see them all, multiple playthroughs are required.

The game is available free