Visual Novel / My Girlfriend Is the President 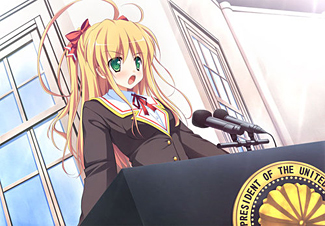 My Girlfriend Is The President (Japanese title: Osananajimi wa Daitouryou, more accurately "My Childhood Friend is the President") is an eroge by the company Alcot.

What happens when a loli-alien-maid crashes her ship into the Earth, eliminating Japan's government? Hilarity Ensues, of course. The entire world is brainwashed into believing the first girl on the scene is the Japanese president, with only two people in the world who remember how it used to be.

Junichiro Hondo, teenage pervert, is the new vice president and one of those who remember the old ways. His childhood friend Yukino Ohama, who isn't named after American President Obama, is the new President of the United States of Nippon and quickly develops a fanbase. The rest of the cast includes a female not-Rahm Emanuel, a gender-flipped version of Vladimir Putin, a personified spaceship and the aforementioned loli-alien-maid.

A trailer can be found here

(link Not Safe for Work) localized the game, using most if not all of TLWiki's

Also, a fandisc was released on August 13, 2010, featuring epilogues of Irina's and Ell's routes. The translation came out in July of 2014.

Not related to My Wife is the Student Council President.

My Girlfriend Is The President provides examples of: