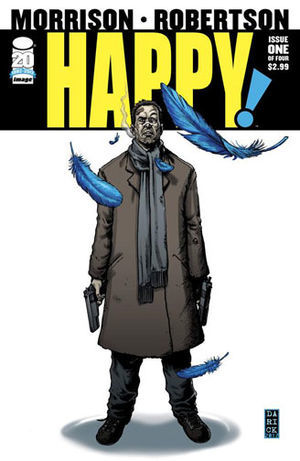 Happy! is a comic-book miniseries created by Grant Morrison and Darick Robertson, and published by Image Comics.

When a hit goes horribly, horribly wrong, ex-cop-turned-hitman Nick Sax takes a bullet in his side and finds himself wanted by cops and mobsters alike. In this dark hour, he gets an unexpected visit from Happy, a little blue flying horse, who enlists him to help find a little girl who's been kidnapped by a psycho in a Santa suit.

The miniseries has been adapted into a TV series of the same name.