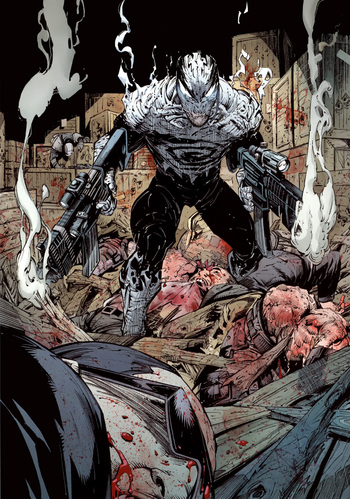 I know what you're thinking. No, he's not Flash Thompson.

Haunt is a Comic Book telling the story of lovelorn Catholic Priest Daniel Kilgore, whose dreary life in New York City takes a dangerous turn after being contacted and followed around by the ghost of CIA agent Kurt Kilgore, his estranged older brother. The character first appeared in ‘’Haunt #1’’ (July 2009), created by Todd McFarlane.

After his death as a result of botching a mission to retrieve information about a supersoldier experiment in Bolivia, Kurt Kilgore comes back as a specter anchored to his brother, Daniel Kilgore, who can combine with his brother through physical contact to transform into a '90s Anti-Hero with dangerous living costume powers and enhanced combat skills. Unfortunately for Daniel, his brother’s clandestine and dangerous life as a CIA field agent has garnered enemies to gather at his doorstop in addition to the fact his personal life is in tatters due to angst over Kurt seducing and marrying Daniel’s former girlfriend, Amanda Kilgore, and his strained relationship with prostitute named Autumn that operates as Charity.

Daniel becomes embroiled in a life of espionage and secrets as he later becomes inducted by the CIA HQ that Kurt was a part of before his death and acts as an agent to complete dangerous missions in order to uncover the answers that resulted in his brother’s death and the machinations of dangerous weapons broker, Mr. Hurg. Along the way he encounters a variety of mysterious organizations and dangerous individuals like the assassin Cobra, the mysterious Alegria, and the sultry Mirage.

The story later suffers from a Snap Back as Daniel later finds the CIA base where he was hired inexplicably abandoned and cleared and is later captured by the dangerous and influential Second Church led by the sinister Deacon Larkin. To make matters worse, his brother Kurt has grown increasingly psychotic and dangerous after murdering Daniel’s prostitute girlfriend. He is freed and befriended by the eccentric Still Harvey Tubman and embarks on another journey to combat the various supernatural dangers that have come to threaten New York City. The series has made some continuation into the Spawn comic verse for reasons unknown.

The comic was created after a confrontation during a Q&A session at the 2006 San Diego Comic-Con, where McFarlane called on Robert Kirkman, who was seated in the audience. Kirkman stood up and expressed that he was a fan, and wanted to know why McFarlane didn't work on comics anymore. After exchanging jokes, Todd asked Kirkman if he would be interested in collaborating on a project, to which Kirkman agreed. The series has been under hiatus for four years due to schedule delays that Todd admitted to being responsible for.