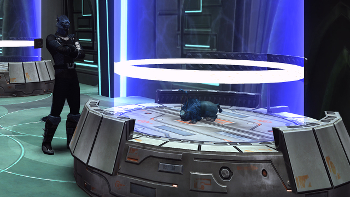 Move over, Tribbles. The Klingons have a new adorable furry menace to conquer!

Honor of ___ is a Star Trek Online Foundry mission series by sirboulevard that starts with a conspiracy on Ferasa and eventually reveals a plot of divide and conquer against the Klingon Empire. The first mission of the series, "Honor of Ferasa"

, was released on December 23, 2013 and quickly earned a place as an STO Spotlight Mission in the rather rapid time of a single month (in fact, it became the spotlight mission for the 4th Aniversary, giving it publicity next to the then new featured episode "A Step Between Stars"). "Honor of Orions" was released on February 20, 2014. "Honor of the Empire" was released February 28th, 2014 and has since gained higher ratings than "Honor of Ferasa."

The story follows the player after the Ferasan Patriarchy contacts the High Council and the Romulan Republic regarding a mysterious incident involving Orions; an exiled rogue Ferasan clan, the Shiassi; and stolen biological samples from New Romulus. Along the way, the player and Ambassador S'taass find themselves trapped in a dangerous, deep, if almost comical in nature conspiracy that threatens to destroy the Klingon Empire.

The series wildly swings on the Sliding Scale of Silliness vs. Seriousness starting very serious, getting silly, then serious and so on until becoming deadly serious towards the end of "Honor of Orions" and staying that way through the finale.

"Honor of the Empire" Tropes