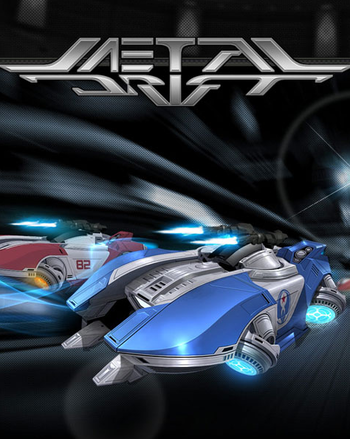 Metal Drift is a First Person Tank-driving game, wherein two teams of high-speed Hover Tanks compete to deliver a ball into each other's goal while defending their own. It was developed and published by indie house Black Jacket Games in October of 2009, and is their first title. It can be found on Steam, and the other PC distribution platforms.

As near as can be told, it's The Future and the most popular sport is this one, hosted live every night in a massive, multilevel complex that contains several arenas of play. The two teams are Triax (Red) and Athalon (Blue), though from the player's perspective, you are always on Athalon facing Triax.

Prior to each match and between lives, you can select one weapon and one ability from a range of each. You start out with only one each and must accrue Experience Points for kills, goals etc. and Level Up to unlock new weapons and abilities.

It can also be thought of a spiritual predecessor to Rocket League.