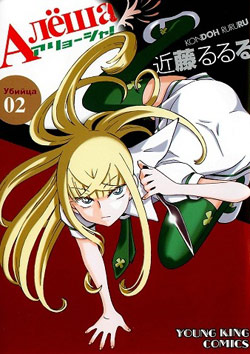 Fulfilling her final mission to the best of her ability.
Alyosha! is a seinen manga by Rururu Kondou, which was serialized in Young King OURS from 2010 to 2013 and compiled into five volumes.
Advertisement:

Foreign exchange student Alyosha Stalina has been attending a Japanese high school for 3 months. She comes from the nation of Solessia but she is yet to fit in with the other students because of her unfriendly demeanor and cold personality. Rightfully so because Alyosha is a trained assassin that has been murdering people since she was 5 years old. Officials in Estolakia, a country devastated by the attacks from Solessia, found the orphaned Alyosha and trained her as a top notch assassin to work against Solessia.

Her most recent and soon to be last mission is to murder the president of Solessia who is to attend the high school she has infiltrated for 3 months. However, the mission is aborted and she is ordered to remain a student. The only thing Alyosha knows how to do is to be an assassin and has never learned how to be a normal teenage girl. Will Alyosha be able to complete her most difficult mission yet?

Compare to the yonkoma Kill Me Baby and the original "Tyke Bomb in High School" series, Full Metal Panic!.

Alyosha! provides examples of the following: