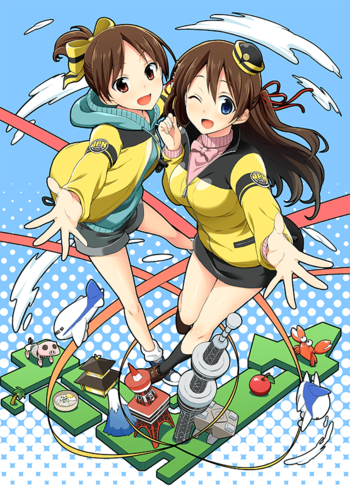 Meet the Misaki sisters (artwork from the 2015 re-release)
One of the very few examples of a Visual Novel made by a Japanese producer specifically for the foreign markets, Go! Go! Nippon! ~My First Trip to Japan~ is Exactly What It Says on the Tin: you play the part of an Occidental Otaku who comes to Japan for the first time and is greeted by two cute sisters who take him sightseeing around the country's most famous landmarks (mostly in the Tokyo area, which to be fair is very expansive). In the span of one week he will learn many things about the country's customs and culture, and will maybe also find love there.
Advertisement:

Despite being made by Overdrive, an established eroge maker, the game is not one of them. It's more of a crash course on contemporary Japan tailored to otaku tastes, and thus making use of several anime, manga and VN tropes. It contains both English and Japanese language, but without any voice acting.

The game was made in 2011 and became available on Steam's Greenlight service in 2014. In 2015 the game received an Updated Re-release powered by the Unity engine, which almost doubled its contents and added more polish such as animated sprites and HD widescreen graphics. Another update was then released in 2016 adding even more content and an improved wallet system.

In July 2021, a YouTube channel called Go! Go! Nippon! Live with You! made it's debut, featuring Makoto and Akira as Virtual Youtubers. You can find it here.

A stated goal for this channel was that if it reached 10,000 subscribers a new game would begin development. As of 23 April 2022 this goal has been reached.