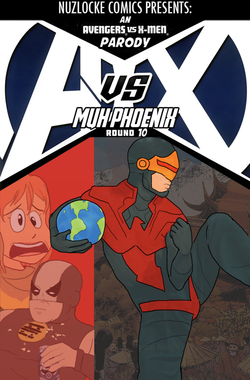 is a parody of the Marvel Comics Crisis Crossover Avengers vs. X-Men made by Nuzlocke. You can either read it online or download each issue in .cbr format.

It greatly exaggerates some aspects of the characters, as well as giving them much sillier motivation to start a conflict than in the original story, and swearing. Lots of swearing.

Keep in mind that most tropes listed below are Played for Laughs.