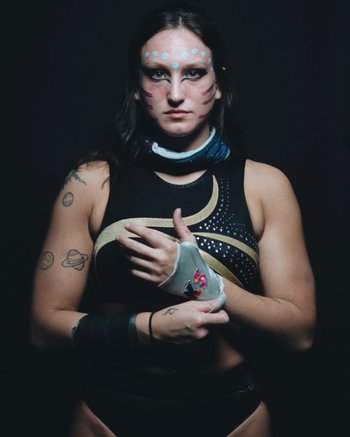 "I am your leader."
Advertisement:

Kris Statlander is an American professional wrestler from West Islip, NY as "The Galaxy's Greatest Alien." She debuted in 2017 after training under Pat Buck at the Create A Pro Wrestling Academy. She has competed for Beyond Wrestling, Women's Wrestling Revolution, Victory Pro Wrestling, WSU, New York Wrestling Connection, Limitless Wrestling, SHIMMER, Ring of Honor, WWE and many other promotions, now currently calling AEW home. She is a former 2x VPW Women's Champion

, a former IndependentWrestling.tv Champion and the WSU Spirit Champion