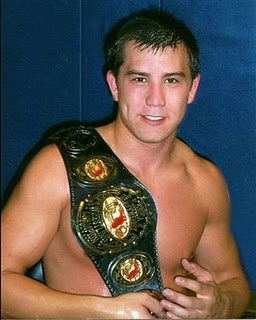 Richard Henry Blood Jr. (born July 7, 1987) is a retired American Professional Wrestler under the name Richie Steamboat. He is, of course, the son of WWE Hall of Famer Ricky "The Dragon" Steamboat. He started his career in 2008 in the Carolinas indy scene after training under George South and Harley Race. He has also competed for Pro Wrestling NOAH, for the World Wrestling Council in Puerto Rico and a variety of independent promotions. He was in WWE's developmental program WWE NXT until he was released. He has also used the name Ricky Steamboat Jr. Among his in-ring achievements, while in WWE's FCW program, he was the last wrestler to hold the FCW Florida Heavyweight Title

with Tyler Black and the FCW 15 Championship

, which was contested in 15-minute iron man matches. He came in third for Pro Wrestling Illustrated's "Rookie Of The Year" Award in 2008, behind Joe Hennig and Brett DiBiase and ahead of Ryan McBride

.After a back injury in 2012 he retired from Wrestling.