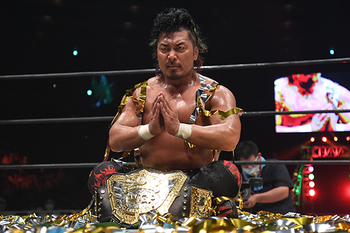 Shin Takagi (b. November 21, 1982), better known by his ring name Shingo Takagi, is a Japanese professional wrestler best known for his runs in Dragon Gate and New Japan Pro-Wrestling, where he is a current member of the stable Los Ingobernables de Japon and current Provisional KOPW Champion in his first reign.

Beginning his career in Dragon Gate as the very first graduate of the Dragon Gate Dojo, Takagi would make an immediate impact as a natural for the business, winning the Wrestling Observer Newsletter's 2005 Rookie of the Year award, and would spend over a decade as one of the promotion's top heels, particularly as leader of the VerseK stable. Through his contract with Dragon Gate, Takagi would also make his mark on the states through appearances in promotions such as Ring of Honor, Pro Wrestling Guerilla and Full Impact Pro, and would establish himself as one of the top independent stars of the Japanese wrestling scene circa the Turn of the Millennium.

After his contract with Dragon Gate ran out, Takagi would should shock the Japanese wrestling world by making a surprise debut for New Japan Pro Wrestling at the King of Pro Wrestling event on October 8th, 2018, where he was revealed as the mysterious new member of Los Ingobernables de Japon only referred to as X until then, serving as the stable's replacement for then injured Hiromu Takahashi in the promotions Junior Heavyweight division. Takagi would immediately become established as the promotion's largest threat, engaging in a winning streak that would last until the finals of the 2019 Best of the Super Juniors tournament, where he would be handed his first singles loss by the man would who would become his perennial arch-rival in New Japan: Will Ospreay.

Shortly after his defeat in the BOSJ, coinciding with Takahashi's return from injury, Takagi would make the transition over to the Heavyweight division, where attention truly started being given to him due to the quality of matches he would have with the likes of Hiroshi Tanahashi, Tomohiro Ishii and even his own stablemate and leader Tetsuya Naito, but despite this he would spend the rest of 2019 as a secondary player in New Japan.

Takagi's true breakthrough would come in 2020, when after stablemate EVIL defected from LIJ to join Bullet Club, a power vacuum was left among the Ungovernable Ones, and it was here where Shingo Takagi would carve out his place in New Japan Pro Wrestling. 2020 would be when Takagi would win his first championships in the company: first as Six Man NEVER Openweight Champion with stablemates Bushi and EVIL, and then his first singles gold as NEVER Openweight Champion, securing two reigns with the belt across the year. He would compete in high level matches throughout 2020, defending the NEVER Openweight Championship at Wrestle Kingdom in 2021 against Jeff Cobb before dropping it to Hiroshi Tanahashi.

After this, Shingo would fully transition into the main event of New Japan, as he began his pursuits of the IWGP World Heavyweight Championship before finally winning the belt by defeating Kazuchika Okada to win the vacant belt at Dominion 6.7, becoming the third holder of the newly introduced belt and establishing himself as New Japan's then top star and premier talent of LIJ over even his leader Tetsuya Naito. Shingo's run with the title was seen as a much needed stabilizing element for the belt: It's creation via combining the IWGP World and Intercontinental Championships was seen as a controversial move by fans, not helped by the fact the first two champions for the title, Kota Ibushi and Will Ospreay, were forced to vacate it due to injury. Shingo's six month run as champion, and the high quality of the matches he would put on during this timeframe, were widely seen as the legitimizing force the belt needed before dropping it to Kazuchika Okada at Wrestle Kingdom in 2022, where he continues to perform as one of New Japan's top attractions.