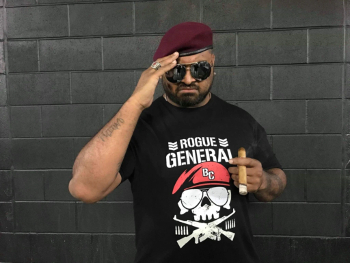 SALUTE* taken from his mentor Yuji Nagata
Simi Taitoko "Toks" Fale (born 8 January 1982) is a Tongan/New Zealand professional wrestler who has worked his entire career for New Japan Pro-Wrestling after a short stint as a rugby union player. Training in 2009 at the NJPW Dojo, he earned a spot on the roster as King Fale, a member of the Young Lion program, in June 2010. He spent the next three years learning both the tools of the trade and the discipline of Japan within the undercard of the company. After almost three years, he graduated the program and gained his first distinct character exposure as an accessory to the history-defining Face–Heel Turn of Prince Devitt. As a "King" being an enforcer to a "Prince" would sound odd, he took on what became his signature moniker — Bad Luck Fale.
Advertisement:

Along with Devitt, Karl Anderson, and Tama Tonga, Fale is one of the four original founding members of the Bullet Club, and one of the two who has stayed with the NJPW group through its entire tenure, gaining a steady reputation as a cool-headed yet vicious behemoth who thinks more than he lets on. He is a 1-time IWGP Intercontinental Champion and a 3-time NEVER Openweight Six-Man Tag Team Champion* twice with both Guerrillas of Destiny, one with Tama Tonga and Yujiro Takahashi, as well as one of the shot-callers in the angle that exiled The Elite from Bullet Club as they left NJPW to form All Elite Wrestling.