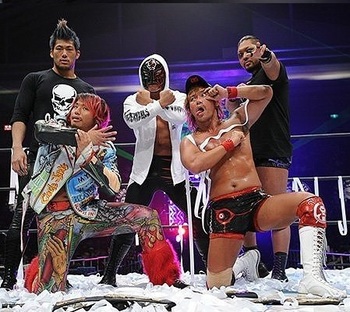 Los Ingobernables de Japon (translated from Spanish into "The Ungovernables of Japan") is a Heel professional wrestling stable in New Japan Pro-Wrestling. While it is a Spin-Off of the Los Ingobernables group in the CMLL promotion, this page is more about the New Japan group. The group has gone on to become wildly popular with crowds and fans with merchandise of the group being often seen at shows.

Tetsuya Naito for the longest time, was one of the top faces in New Japan but was seen as someone who never could get over the hump as despite flirtations with the main event scene, never could get the fans to rally behind him and was labeled as an Underachiever having not tapped into his potential. But that all changed in spring of 2015 when he left New Japan for an excursion to Mexico and wrestled there for a time.

When he came back he had undergone a metamorphosis. Gone were the bright outfits and jacket and combed over hair; Naito, to the shock of everyone in New Japan from the roster to the announcers to the fans, had changed. He now was barely putting any effort into his matches and often could be seen dozing off during the matches and not trying to help his teammates. He didn't even take off his gear and wrestled in it, becoming a full on slacker who couldn't be bothered to help out as he didn't care about what was going on anymore as it took him minutes for him to make his debut and would walk out on people or steal the win whenever it suited him. He then revealed after the 2015 G1 Climax that he had joined up with the group Los Ingobernables in Mexico and was creating his own port of the faction, having adopted its catchphrase and lifestyle "Tranquilo".

Two months later at King of Pro Wrestling 2015, in a match against Hiroshi Tanahashi, a mysterious masked man clad in a dark suit entered the arena with Naito, and during the match attacked and interfered and unmasked himself as Takaaki Watanabe, who had returned from his excursion to America as the second member member of Naito's Power Stable. But this was not the same Watanabe people had remembered as a Young Lion; he had underwent a change, becoming much more vicious and brutal. In his place was EVIL, "The King of Darkness".

During the opening match of the World Tag League 2015, a third man accompanied Naito and EVIL to the ring as the newest member, a returning Bushi, returning from injury. Bushi would begin spraying opponents with a mist-like substance in matches as he too became more vicious. The Deadly Duo had now become a Terrible Trio.

In March 2016 at the New Japan Cup finals, Naito defeated Hirooki Goto to win the New Japan Cup and afterwards was challenged by IWGP Heavyweight Champion Kazuchika Okada to face him. Naito agreed to do so, and they were set to face another at Invasion Attack 2016. The chance to become IWGP Heavyweight Champion at last presented itself to him and Naito was ready to do whatever it took to capture it. As the two fought on, a skull-masked man entered the ring and assaulted Okada, laying him out. The man unmasking himself to be Seiya Sanada, now wrestling as SANADA, a newcomer to New Japan, invited by Naito. Naito took advantage and, with Okada weakened, hit his finisher on him and won the IWGP Heavyweight Championship.

Hiromu Takahashi for the past three years had been on excursion in Mexico and the US under the name Kamaitachi, but returned in November under his own name and issued a challenge to IWGP Junior Heavyweight Champion Kushida for New Japan's biggest show, Wrestle Kingdom. A month later, Takahashi would appear during a tag match between Naito and the original Los Ingobernables leader in Mexico, Rush, against Hiroshi Tanahashi and Kushida. After the match Naito offered him a Los Ingobernables hat and Hiromu accepted, bringing the group up to five.

The group found much success winning numerous titles, as Bushi won the CMLL World Welterweight and IWGP Junior Heavyweight titles, whilst EVIL won the NEVER Openweight title and Naito would add the IWGP Intercontinetal title to his mantle as well, becoming arguably the most successful of New Japan's groups at the time. But LIJ was not done adding either titles or members. Japanese sports newspaper Tokyo Sports cited LIJ's impact on NJPW as one of the main factors in the magazine naming Naito the 2016 Wrestler of the Year, ending a five-year run in which the award had been won by either Tanahashi or Okada. In addition to Naito, SANADA and EVIL made it clear that they, like Naito, would challenge the IWGP Heavyweight and Intercontinental Champions, whoever they may be. This did mean a possible inter-LIJ challenge was likely.

After Hiromu was injured and had to give up the IWGP Junior Heavyweight Championship, LIJ recruited a new member, referred to as "X". At King of Pro Wrestling 2018, X was revealed to be Shingo Takagi, formerly of Dragon Gate. Shingo started at Junior Heavyweight (at least, he claimed to be one) before eventually moving up to heavyweight, around the same time Hiromu would eventually return from his almost career ending injury, on the Road to Wrestle Kingdom 14.

At Wrestle Kingdom 14, Hiromu would regain his title, and retire the legendary Jushin Thunder Liger. The two night Wrestle Kingdom would be a near clean sweep for LIJ as well, with EVIL, Shingo, and Bushi winning the NEVER 6-Man Tag Team Championship. But the biggest story, in LIJ's greatest moment of crowning, was Tetsuya Naito winning the "Double Gold Dash" to become the first ever dual IWGP Heavyweight and Intercontinental Champion. Naito was at the top of the mountain.

Due to the COVID-19 pandemic, Naito would have few opportunities to defend his dual titles, though he did retain against KENTA prior to the start. After the pandemic, LIJ would continue its year of success: the pandemic resulted in almost every non-Japanese wrestler unable to enter Japan, so the 2020 New Japan Cup saw three members of LIJ in the semifinals, with Hiromu losing to Okada, and EVIL defeating SANADA in 20 minutes. EVIL would go on to win New Japan Cup, earning the right to challenge his friend and LIJ co-founder Naito for both titles.

EVIL would quickly challenge, and in the biggest surprise of LIJ's history, EVIL would defeat his former friend and teammate, successfully winning both titles with the help of Bullet Club, to whom he defected. Hiromu would then announce himself as the next challenger. Despite falling short, it would open the door for Naito to subsequently avenge himself by defeating EVIL to regain both belts at Summer Struggle 2020, and would go on to keep his titles until losing it to Kota Ibushi at Wrestle Kingdom 15. At the same event, SANADA would defeat EVIL in a battle between the former tag team partners, while Hiromu (fresh off winning the Best of the Super Juniors) would walk away from the Tokyo Dome as the new IWGP Junior Heavyweight Champion once more by defeating Taiji Ishimori.

2021 would see a reversal of roles within LIJ, as Shingo began amassing amazing singles performances as NEVER Openweight Champion. He came close to winning the 2021 New Japan Cup, eventually losing to future winner Will Ospreay, who would go on to become the second IWGP World Heavyweight Champion. An injury to the Assassin left the belt vacated, which saw Shingo successfully challenge for the open spot by defeating Kazuchika Okada and become New Japan's top star. Elsewhere, Naito and SANADA began teaming regularly within the tag division, and earned a reign as IWGP Tag Team Championships through their rivalry with Suzuki-gun's Dangerous Tekkers.