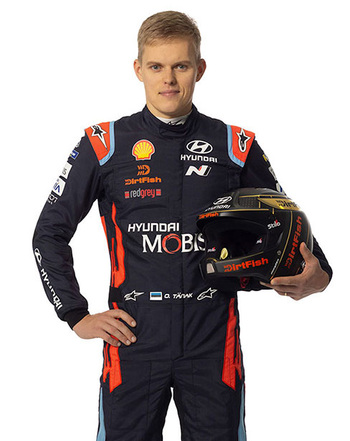 Ott Tänak during his stint at Hyundai.
Advertisement:

Ott Tänaknote pronounced as Oit (as in "Oyl" in Olive Oyl with T replacing the L) Tanak (born 15 October 1987) is an Estonian rally driver, currently teamed with Martin Järveoja and competing for Hyundai Motorsport in the World Rally Championship.

Hailing from Kärla Parish, Saaremaa, Tänak picked up his affinity for motor racing from his father Ivar who was a firefighter and took up rallying during the 80s and 90s as a hobby, starting with go-karts during his childhood and eventually transitioning to rallying. After a series of rallies and rallysprint races in the early 2000s, initially driving a series of jalopies one of them being a rather cantankerous Volkswagen Golf, Tänak, racing under Markko Märtin's tutelage, made his WRC debut in 2009 on the 2009 Rally de Portugal, finishing 20th overall, and later won the European Pirelli Star Driver shootout held in Austria. He eventually signed a five-year contract with Ford, scoring his first points in the 2011 Rally Mexico. Tanak's career under Ford was a mixed bag, leaving Ford in 2012 (and effectively retiring from the WRC circuit for a period) and managing his own local team. He did however return to WRC in 2014 under the WRC-2 support category, and reunited with M-Sport in 2015 where he gained notoriety for the "Titanak" incident in which his Ford Fiesta went off-course and into a reservoir. Incredibly, the car was brought back to life

, being picked up by mainstream news organisations.

Tänak signed a two-year contract with Toyota in 2018, racing alongside teammates Jari-Matti Latvala and Esapekka Lappi. To the surprise of many, he was able to score two podiums in Monte Carlo and Corsica respectively, and pulled off a Curb-Stomp Battle in Argentina where he led the rally by over 46 seconds despite a half-spin that would've cost him the rally. He repeated this success in Rally Finland where he fiercely contested the rally with Norway's Mads Ostberg, in Rallye Deutschland in which a tyre puncture sustained by Sebastien Ogier gave him an opportunity to further extend his lead, and in Rally Turkey where what appeared to be a wacky race culminating in more than a dozen competitors retiring or getting wrecked in the gruelling stages played in his favour and allowed him to rise up from the championship standings, giving Ogier and Neuville a run for their money. This winning streak wasn't to last though, as punctures and collisions in Wales, Spain and Australia kept him from dethroning Ogier, though he did get accolades for his tenacity and penchant for breakneck speed.

He didn't disappoint his fans in 2019, however, when he claimed a third-place podium in Monte Carlo, and for the first time in his career, led the driver's championship standings through his victory in Sweden; while this lead was short-lived as he suffered setbacks in Corsica and Argentina, his victory in the inaugural Rally Chile more than made up for it, also snatching all five Power Stage points in the process, demoting rival Thierry Neuville to third (following a devastating accident on part of Neuville) and putting Tänak once again in striking distance to Ogier. Despite Tänak having failed to win Italy and Turkey, he scored four more wins in Portugal, Finland, Germany and Wales, which gave him a significant points lead over Ogier and Neuville—Ogier's misfortune by way of a power steering issue with his Citröen eased the pressure on the Estonian, who secured his maiden championship crown after a second-place finish (plus a Power Stage win with five bonus points) in Rally Catalunya, making him the first Estonian to win a WRC driver's titlenote And consequently the first co-driver's title for compatriot Martin Järveoja and the first non-French driver's champion since Petter Solberg in 2003. Tänak and his (now-former) Toyota teammates were to defend their manufacturer's championship title in Australia, but this has sadly been shelved when a series of bushfires which have claimed a dozen lives and razed millions worth of property took place around the rally venue. Hyundai thus won the manufacturer's crown by default, their first since joining the championship, though given the circumstances, whatever celebration they would've had was somewhat muted.

that he will no longer be involved with Toyota and will switch sides with rival manufacturer Hyundai, thereby making him teammates with Neuville, Dani Sordo and veteran driver Sebastien Loeb. Not everyone is pleased with the move, but given the rumoured issues Tänak had with Toyota's management and the Yaris' lingering reliability problems, it isn't surprising for those in the rallying scene to know about the move. Ironically enough, Ogier went on to sign up for a one-time contract with Toyota in Tänak's place, sharing the roster of former Ford stablemate Elfyn Evans and WRC newcomer Kalle Rovanperanote Rovanpera had been in the WRC 2 circuit for quite some time, but he made his World Rally Car debut in 2020..

A feature-length documentary chronicling his life and career entitled Ott Tänak: The Movie