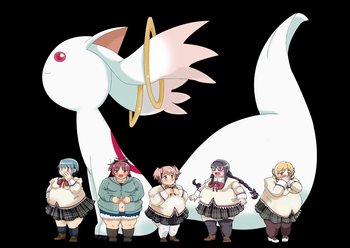 This initial embarrassment is only the beginning of a Cibus' nightmarish last days.
Maybe it's an epidemic. Night of the XXL Girls! You'll be next, you've been close to Patient Zero.
— Sayaka

is an alternate version of the events of Puella Magi Madoka Magica. In this version of things, magical girls become big and fat as part of their contracts, and fight flesh-eating monstrosities known as Esurientes.

There is also a spinoff fic titled Starcrossed Sisters

If anyone's interested, the author also has a deviantArt gallery

of the main characters as they'd appear in the fic.

And, for those of you into interactive stories, he has also carved a niche out on Writing.com for people to start their own stories based on the original fanfic:

, a similar interactive story about magical girls and weight gain.