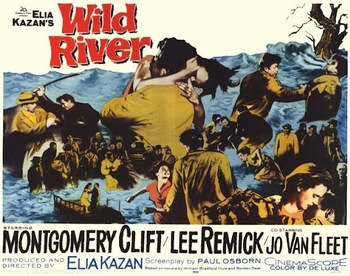 It is sometime in the mid-1930s. Chuck Glover (Clift) has arrived in Garthville, Tennessee, to become the new supervisor of the local office of the Tennessee Valley Authority

and complete final preparations for the activation of a hydroelectric dam that will flood the Tennessee River valley, creating a new lake. This requires landowners along the river to sell their land and relocate before it's flooded. Chuck's problem is that one family, the Garths, refuse to sell Garth Island in the middle of the river. Specifically, 80-year-old family matriarch Ella Garth (Van Fleet) refuses to sell it, as she's lived there all her adult life and her husband, the town's founder, is buried there.

While Chuck is trying to get Ella to cooperate and move off the island before the impending floodwaters wipe most of it off the map, he is also romancing her lovely widowed granddaughter, Carol (Remick). Additionally, Chuck soon discovers he has a more serious opponent than Ella. All the local white racists object to Chuck's plan to hire black laborers and pay them fair wages to clear land for the dam. The racists, besides objecting on grounds of simple racism, fear losing cheap black labor for their own businesses. Head racist goon R.J. Bailey (Albert Salmi) is soon prepared to take violent action against Chuck.

The movie's plot and characters were adapted from two different 1950s novels dealing with the Tennessee Valley Authority's dams and the families evicted by them: Dunbar's Cove by Borden Deal and Mud on the Stars by William Bradford Huie.