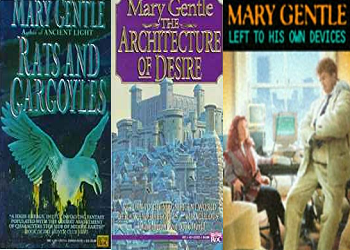 Rats and Gargoyles, The Architecture of Desire and Left to His Own Devices are a trilogy of novels by Mary Gentle, published individually in the early 1990s then collected in a 2003 omnibus edition under the title White Crow. The omnibus also includes three linked short stories, "Beggars in Satin", "The Knot Garden", and "Black Motley".
Advertisement:

The novels and stories feature a woman named Valentine who is associated with the epithet or phrase "White Crow," and a man named Baltazar Casaubon...and pretty much everything else varies from tale to tale, including the rest of Valentine's name. They're not even set in a consistent world; Rats and Gargoyles is set in a gothic otherworld ruled by sapient rat people, The Architecture of Desire in a magical Alternate History of the 17th century, and Left to His Own Devices has a near-future Cyberpunk setting.

(Note: The individual edition of Left to His Own Devices included several short stories as additional material. With the exception of "Black Motley" they were unrelated to this series and are not covered on this page.)