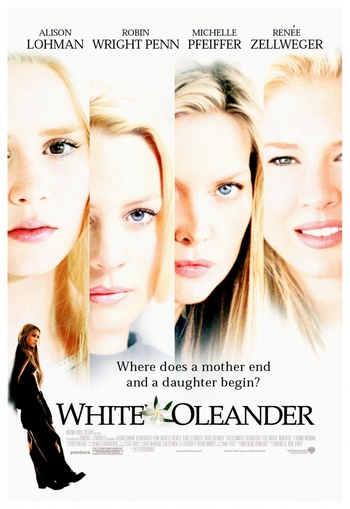 White Oleander is 2002 drama film directed by Peter Kosminsky. The cast features Alison Lohman in the central role of Astrid Magnussen, and Michelle Pfeiffer as her temperamental mother Ingrid, alongside Robin Wright, Renée Zellweger and Billy Connolly in supporting roles.

The screenplay was adapted from the novel of the same name by Janet Fitch, which was selected for Oprah's Book Club in 1999.

Young Astrid is very close to her single mother Ingrid, whose free-spirited, semi-man-hating lifestyle is all well and good until she meets and eventually poisons Barry Kolker (Connolly) after he romances and then spurns her. When Ingrid is sent to prison for the murder, Astrid is left bouncing around foster care and increasingly wondering if her mother's parenting was really very good in the first place. She lives with all different types of families, from born-again Christians to posh to a youth detention center. As she grows older, she recognizes how her mother's manipulative personality has caused her most all of her life's grief. She is forced to really soul search and is left with more questions than answers, including why her mother committed the murder.