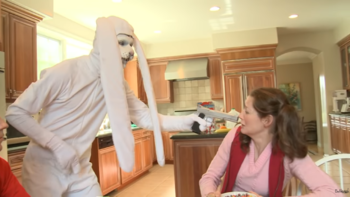 is a YouTube video uploaded on April 2, 2010 by Sethward

The video starts off as any other Trix commercial would, with the rabbit sneaking across the kitchen and coming across a box of Trix Swirls, but just as he is about to savour his lifelong treat, he is interrupted by a boy and a girl who tell him "Silly rabbit, Trix are for kids!", as the rabbit is elbowed in the chest by the boy. As the kids go at the table to enjoy some Trix, the rabbit, meanwhile, begins to take a turn for the worse and plot some vengeance...