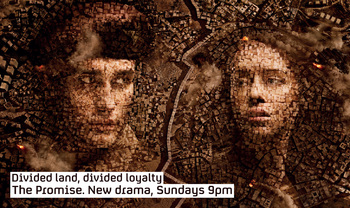 Erin Matthews, a rather average English girl who just graduated from school, decides to accompany her Jewish friend Eliza to Israel, where the latter, being half-Israeli herself, is due to report to her mandatory service in the Israeli Defence Forces.

As Erin sets off, she finds the diary of her secretive and estranged grandfather Len - now eighty years old, paralysed by a stroke and at death's doorstep - who was in Palestine himself for a few years, stationed as a soldier in the 6th Airborne Division during the end of its British colonial tenure.

Armed with her grandfather's memories, Erin proceeds to experience the controversial ethnic strife that has plagued the land for sixty-plus years for herself - in all its ugliness, brutality, injustice, and surprising subtleties - periodically stopping to look back on how things used to be two mere generations ago...

The Promise is a 2011 British four-part miniseries, directed by Peter Kosminsky and released by Channel Four, that juxtaposes two different periods of the Arab–Israeli Conflict - its beginnings in the post-World War II British Mandate of Palestine, and the (then-)current contentious situation between the State of Israel and the semi-autonomous Palestinian Territories - and comments on just how much or how little things have changed ever since then.

Unsurprisingly, given the highly-flammable subject matter, this series roused some controversy upon airing, with some accusing it of taking an exceedingly pro-Palestinian and anti-Israeli stance, or even downright antisemitism (which is ironic, since Kosminsky himself is a Jew), while others see it as a brutally honest and well-researched commentary on the moral vacuum that the conflict has turned the region into, brought on by a decades-old Cycle of Revenge.

Not to be confused with the 2016 film of the same name.

In this scene, it only becomes clear that something is wrong with the doctors almost immediately before all hell breaks loose, owing to director Peter Kosminsky's strictly POV-tied camera direction.

In this scene, it only becomes clear that something is wrong with the doctors almost immediately before all hell breaks loose, owing to director Peter Kosminsky's strictly POV-tied camera direction.