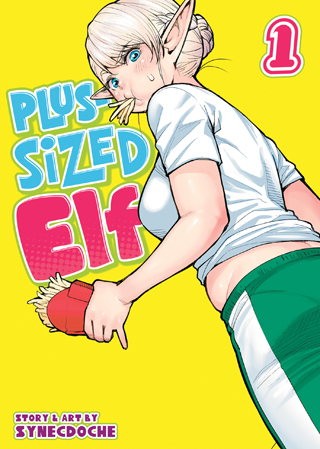 Elfuda with a mouthful of her favorite french fries
Advertisement:

Plus-Sized Elf (Elf-san wa Yaserarenai, or "Ms. Elf Can't Lose Weight") is an ecchi comedy seinen manga series by Synecdoche, originally published by Wani Books from 2016 to 2021 on their Comicgum site. The series was cancelled when Wani Books wound down Comic Gum, but Synecdoche brought it over to Akita Shoten, where it was relaunched as Shin Elf-san wa Yaserarenai, or "New Ms. Elf Can't Lose Weight", on LINE Manga. Seven Seas Entertainment have licensed the original series for English release.

Naoe Tomoatsu is a massage therapist at the Smiley Boar clinic. Things are pretty normal for him there until one night when he gets a new client who happens to be an elf. This elf, named Elfuda, came to our world from another dimension and wants to go back. However, before she can go, she has to lose the weight she gained during her stay, which is very difficult due to her newly-gained addiction to french fries, so she wants Naoe's help slimming down. As he tries to help Elfuda keep her weight under control, Naoe meets other non-human women in a similar situation who also need his assistance.