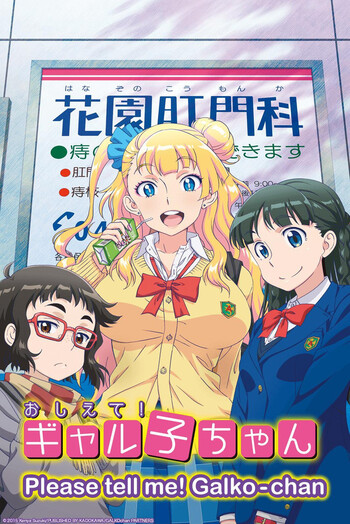 From left to right: Otako, Galko and Ojou
Is it true that the friends you make in high school are your friends for life?
—end of Chapter 17
Advertisement:

The idea is simple. We have three archetypal girls—Galko, Otako, and Ojou—talking about girl stuff. Only thing is, that girl stuff they talk about is often the less-than-innocent kind.

Please Tell Me! Galko-chan (In Japanese: おしえて！ギャル子ちゃん/ Oshiete! Galko-chan/Gyaruko-chan) is a Slice of Life/ecchi manga created by Ken'ya Suzuki, which began serialization in Comic Walker in 2014. A selection of skits from the first thirty chapters had been adapted into a series of 7-½ minute shorts for the Winter 2016 Anime season. The manga is licensed in North America by Seven Seas Entertainment.

On December 19, 2021, the author Kenya Suzuki was arrested for importing child pornography

, making the future of the manga uncertain. Kadokawa later announced that the serialization is suspended

until further notice following his arrest and the allegations against him.

Please Tell Me! Galko-chan contains examples of the following tropes:

Tropes # to D
Tropes E to H
Tropes I to O
Advertisement:
Tropes P to Z