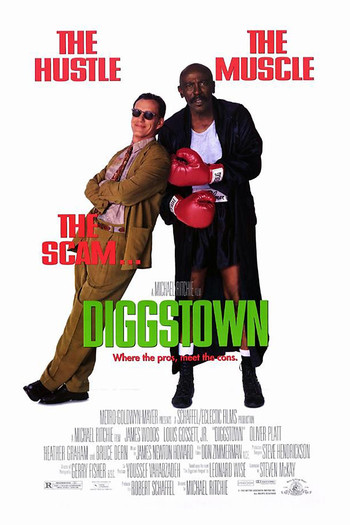 Gillon: There's two things we never joke about here in Diggstown, Mr. Caine: our boxing and our betting.
Advertisement:

Diggstown is a 1992 boxing-themed comedy-drama film directed by Michael Ritchie and starring James Woods, Louis Gossett Jr. and Bruce Dern. The film is based on a novel by Leonard Wise. It plays on cable television a lot.

Gabriel Caine (Woods) is a conman with a plan to hustle the corrupt city boss of Diggstown, John Gillon (Dern), with a daring boxing wager. "Honey" Roy Palmer (Gossett), a retired, almost-was boxer, must defeat ten opponents in 24 hours to win millions of dollars. Both sides of the bet try to out-fox the other with various schemes to rig the contest in their favor.