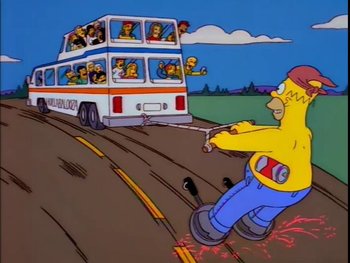 Feeling uncool, Homer decides to take Bart and Lisa to the Hullabalooza music festival. But, while feeling more out of place, Homer accidentally takes a cannonball to the stomach. This newfound skill makes him the sleeper hit of the festival, and a hero to Bart — but at what cost to his health?