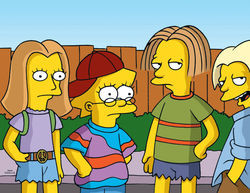 On the last day of school, no one bothers to sign Lisa's yearbook, making her feel depressed about her lack of true friends and, during a trip to Flanders' beach house, Lisa decides to ditch her nerdy persona and be one of the cool kids, which makes her popular with some local teenagers (one of which is voiced by guest star Christina Ricci). Meanwhile, Homer goes to the beachside Kwik-E-Mart to buy some illegal fireworks.