These are the characters that debuted in the game Judgment.

"Still wanna take this to court? Fair warning... Suing me is a bad idea."

The Protagonist of Judgment.

Once a promising defense attorney, Yagami was damned by his fellow attorneys and the public after one of his old clients, acquitted of a previous criminal charge, was caught by police for murdering his girlfriend. As such, he drops out of the public eye and starts up the Yagami Detective Agency, working as a PI alongside Kaito.

A long-time friend of Yagami, he joined Yagami to work as a PI following his excommunication from the Matsugane family a year before the events of the game.
Fumiya Sugiura/"Jester" 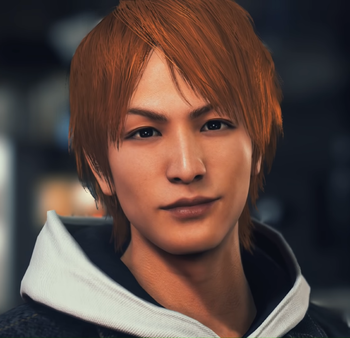 An ex-IT engineer who discovered that his Kansai-based employer was embezzling money, he became a masked thief who wears a Guy Fawkes-based mask to hide his identity in order to avoid being hunted down.
Makoto Tsukumo 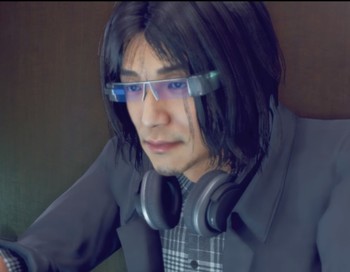 A YDA informant who's usually seen inside the Cafe Mantai internet cafe.
Advertisement:

The head of the law firm, he recruited Yagami after he passed the bar exams as a defense attorney. After Yagami was publicly disgraced, Genda decides to recruit him to help him out with errands.
Masamichi Shintani

A member of the Genda Law Office, who was somewhat envious of Yagami's success prior to his downfall. At the start of the game, he's chosen to represent Hamura in court to defend him.
Saori Shirosaki

A female attorney in the Genda Law Office. She's friends with Mafuyu from way back in college when they were studying for their law degrees.
Issei Hoshino

The newest recruit to the law office after Yagami starts to investigate the eye gouging case. He also helps Yagami out whenever possible.
Advertisement:

The head of the Tokyo District Prosecutor's Office and Prosecutor-General.
Mafuyu Fujii

A public prosecutor assigned to the Tokyo District Prosecutor's Office who knows Yagami when he first started practicing law. Mafuyu checks up on him once in a while after he publicly resigned from the law firm.

She's friends with Saori, going back to university when the two of them were studying Law.
Keigo Izumida

The prosecutor involved in prosecuting Okubo. After he lost the case, Izumida was humiliated by other public prosecutors in the rest of the country.

The current head of the family who raised Yagami when he was a child and bankrolled his university education. He also spared Kaito's life and told Yagami that Hamura's influence is spreading to the family, leaving him potentially marginalized.
Kyohei Hamura

The clan captain of the Matsugane family and currently running it from behind the scenes financially, which has slowly eclipsed the patriarch's influence.
Toru Higashi

A member of the Matsugane family and a close friend to Kaito. A year after Kaito's expulsion from the Matsugane, he's risen through the ranks and now commands his own group, though it's clear he's not the same person he once was.
Kojiro Ozaki 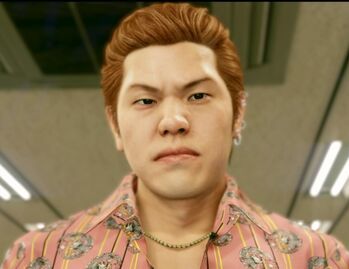 A Matsugane family member under Hamura's faction. Following Hamura going missing, he wants to go after the Mole and rebuild the family.
"Cane Man"/Suzaki 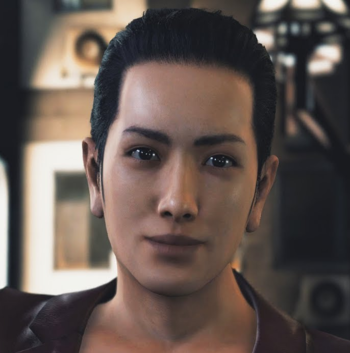 A Matsugane assassin working for Hamura. He fights with a variety of weapons disguised as canes, hence the name.
Tashiro 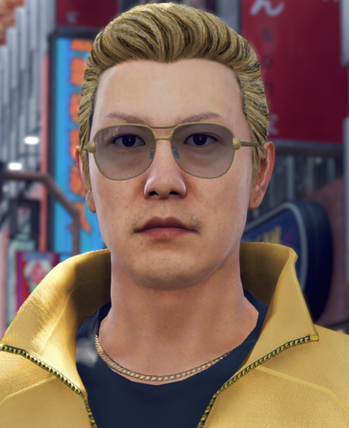 A Matsugane Family member under Hamura's faction. He dresses up in gold-themed clothing and dyes his hair blond. At one point, he can be recruited as an ally. 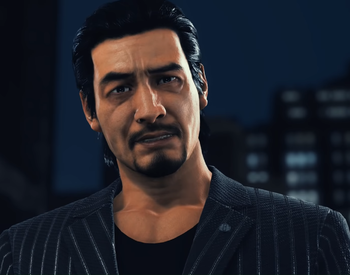 The clan captain of the Kyorei Family.
Akira Murase 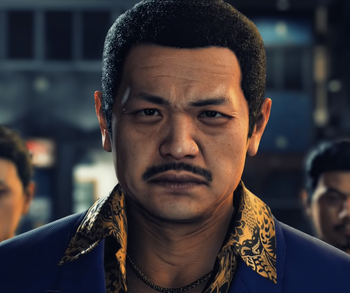 A lieutenant in the Kyorei Family, who's got beef against Hamura for a hand in killing one of his men, Kume.

As a Whole
Kenta Kasai 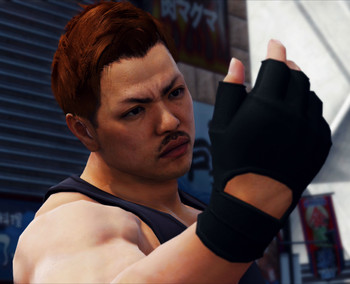 The third member of the Keihin Four, and the biggest one of the bunch.
Matsuhisa Koga 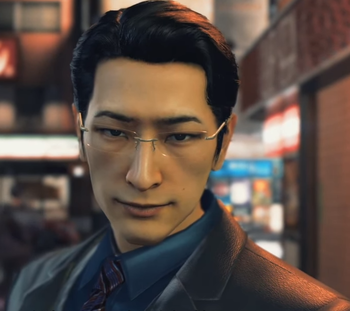 The main leader of the Keihin Gang, and arguably the most powerful one of the four.

An investigator put onto the serial murder case that surrounds the game's plot. He's from the Organized Crime Division.

A detective with the Kamurucho Police Station's Organized Crime Division, he's a main source of info for Yagami and Kaito.
Sakuraba

Crow
The leader behind the burglary ring. He worked with Jester and has been looking after him after their previous job went sour. As Yagami looks for Jester, however, he begins to learn some disturbing information. 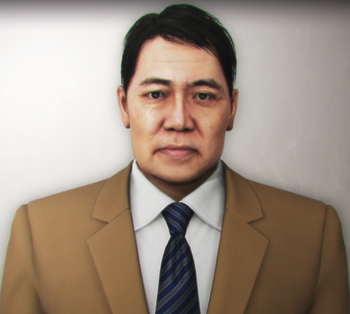 The former vice-director of the ADDC. Was murdered in an apparent drunken brawl six months before the start of the game.
Hashimoto

A female doctor at the ADDC.
Kaoru Ichinose 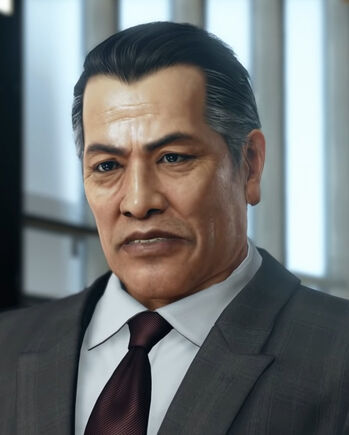 The Vice-Minister of the Ministry of Health, Labor and Welfare.
Ishimatsu 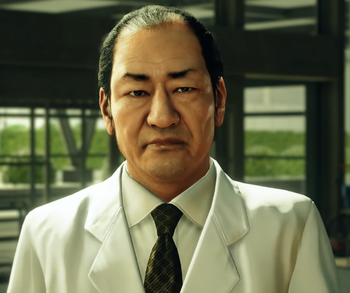 The scientist in charge of overseeing R&D of AD-9.
Mashiko

Bartender and owner of said bar. Helped Yagami on his feet when he arrived in Kamurocho as a teen to get away from the publiclity of his parents' deaths due to his Dark and Troubled Past.
Mari

A known BT regular. She knows Yagami from when he became a lawyer.

A freelancer journalist who covered Yagami's fall from grace after his former client Okubo murdered his girlfriend.
Uzawa

The subject of the prologue case Yagami takes. A detective that tries to repay his debts to the Matsugane by betting on horses, hence he is given the initial title of Horseplayer Detective. Later, he's found to be the detective Mafuyu uses to uncover Morita's background.
Shinpei Okubo

The last client of the Genda Law Office when Yagami was a lawyer. After Okubo was acquitted of dumping a dead corpse from a murder while working with the ADDC, he was arrested again for committing arson.

At the start of the game, Okubo is on Death Row awaiting his execution.
Emi Terasawa 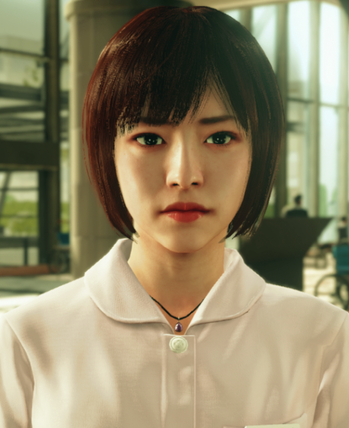 A nurse who worked in the ADDC and Okubo's girlfriend, she was killed days after he was acquitted of previous criminal charges.
Shigeru Kajihira 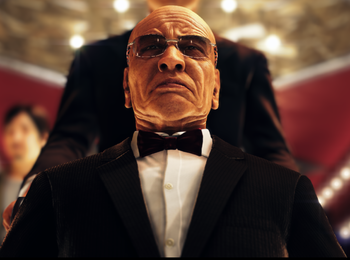 A construction mogul, and the chairman of Kajihira Holding. He sponsors the Kyorei clan in their turf war against the Tojo.
Kim

An employee who received trouble from the Keihin Gang. 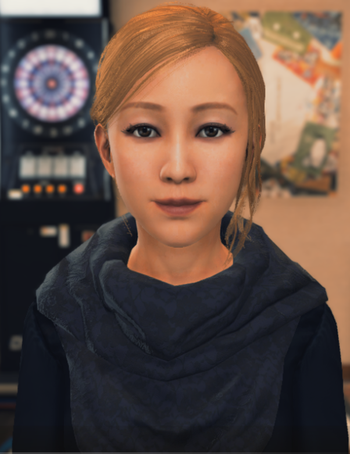 A woman with the power to detect calamities that will fall upon people.
Nanami Matsuoka 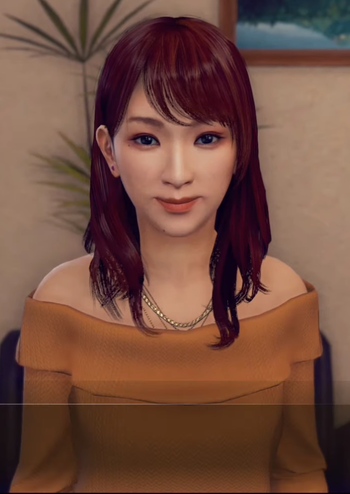 A workaholic that Yagami saves from a stalker. 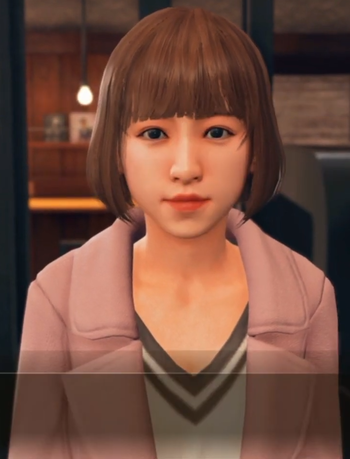 A young street musician looking for her big break. 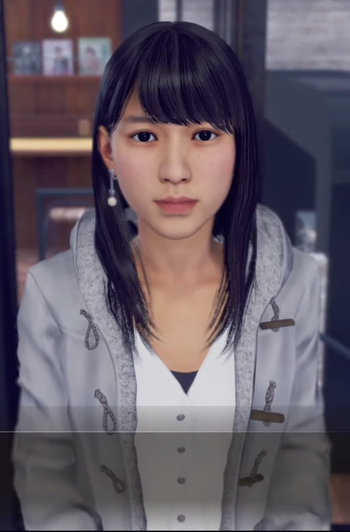 A college student who is targeted by the pervert gang Twisted Trio.

Sakura Amamiya
A massage therapist from Osaka's Sotenbori district. If she visits the agency and gives a massage session, Yagami's EX gauge can increase over time.
Ryan Acosta

A foreigner training to be a ninja. If Yagami makes friends with him, he sometimes helps out in fights by using his ninja skills and his ninjato.
Ryo Suzaki

A self-titled 'free spirit'; by that, he means he consumes spirits freely. He's also the older twin brother of a mini-boss, the Cane Man, and is available shortly after fighting the latter in the Soleil building. He's usually found in the Earth Angel bar.
Yosuke Saotome
A cabaret club barker who hires Yagami to protect his twin sister Tsukino from the pervert gang known as the Twisted Trio.
Yoshida
The manager of Yoshida Batting Center.

Warning: All spoilers for the following characters are unmarked. Read at your own risk.
The Mole 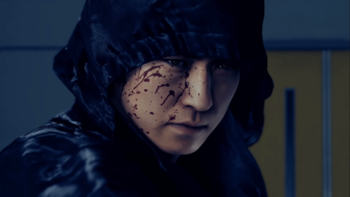 As it turns out, The Mole is none other than Mitsuru Kuroiwa, the investigator put onto the serial murder case. A Dirty Cop on a far worse level than Ayabe. 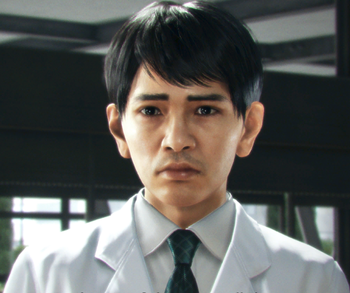 The creator of AD-9 and Emi's true murderer. Shono, in actuality has been using Kyorei clan Yakuza, delivered to him by Hamura, as human experiments for AD-9. After accidentally murdering Waku, he attempted to frame Okubo. After he was found not guilty, he murdered Okubo's girlfriend Emi and once again framed him, essentially ruining Yagami's (who was Okubo's lawyer) reputation and career.