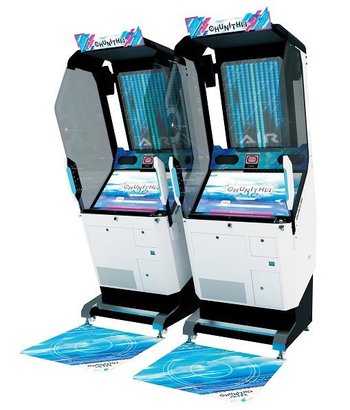 CHUNITHM (チュウニズム) is a Rhythm Game for arcades in Japan and select other countries in the eastern Pacific developed and published by SEGA, originally released in 2015. It is one of SEGA's three Performai games, alongside maimai and O.N.G.E.K.I.
Advertisement:

Notes need not be fixed-width like in many other rhythm games; each note can be as little as 1/16th as wide as the playing field, or as wide as the entire playfield, so depending on the note you have some leeway in how precise you have to be to hit it.

It is currently one of the most popular rhythm games in Japan, having surpassed DanceDanceRevolution in commercial success there and often competing with beatmania IIDX on that same metric, despite Sega only having about half as much time in the arcade rhythm game scene as Konami. It was originally a Japan-only game, but high demand outside of Japan led to SEGA producing a separate line of releases for the Asia Pacific / Oceania region.

In 2021, a "Gold" version of the CHUNITHM cabinet was released, with CHUNITHM NEW mandating it. The Gold cabinet comes with a 120 Hz monitor as opposed to the older "Silver" cabinet's 60 Hz monitor, but otherwise has the same functionality. The Japanese arcade chain Round 1 would then send its Silver cabinets to its US branches, all running CHUNITHM PARADISE LOST with all net features disabled.

Compare Deemo, which shares a few common interface elements such as the variable-width notes, Arcaea which borrows the "air notes" concept, Nostalgia (BEMANI) which some have described as "Chunithm except with piano music", BanG Dream! Girls Band Party! which has been called "Chunithm but with idol bands" by some players, Tokyo 7th Sisters and Project SEKAI, both of which effectively port Chunithm mechanics onto the mobile screen (since the November 2017 update for the former), and Dance Rush which has been described as Chunithm EXCEPT WITH YOUR FEET!

The CHUNITHM series provides examples of the following: