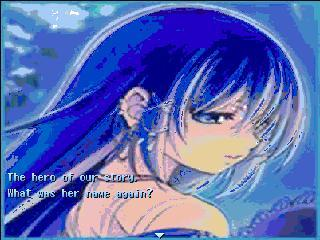 "The hero of our story. What was her name again?"
Advertisement:

An amateur RPG Maker game from 2013, freely available on Rpgmaker.net

The basic premise involves a spunky, tomboyish beggar girl, who is called on a Mission from God to save the world by restoring balance. An evil demon is threatening the world and needs to be stopped. Along the way she meets an assorted group of characters starting with her potential love interest, an effeminate swordsman. Beyond the initial story, however, there are numerous side tales that can be gleaned from romantic sidequests, and some random dark humor by exploring the world. Not to mention some hints about the nature of the hero herself, and the nature of the world.

There are plans to publish the story as a novel. This game inspired Mune Shinri, which is the book of the main "religion" of this Religious Edutainment.