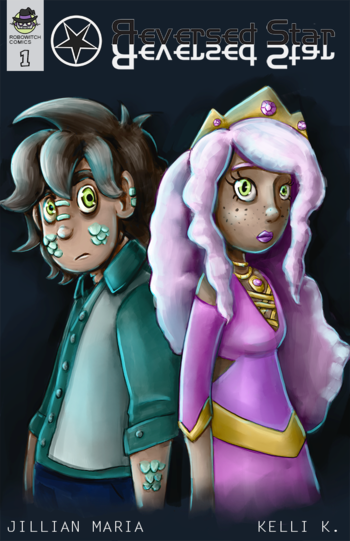 Where did it begin?
Reversed Star is a sci-fi webcomic that follows the concurrent stories of Icaruss, a studious and proud human/alien hybrid, and Evangeline, a spoiled and generous human heiress. Despite living on opposite sides of the galaxy, the two share an unexplained psychic link, with Icaruss seeing through Evangeline’s eyes in dreams when she’s in danger. And when Evangeline is kidnapped and held captive, Icaruss takes it upon himself to cross the galaxy to rescue her with a few companions and the help of his twin sister, Thara.
Advertisement:

Reversed Star started posting on October 17, 2017. It is currently being hosted on tumblr

and posts a new page every Tuesday at 2 PM EST. Additional information and sketches are also released on the creators' blog