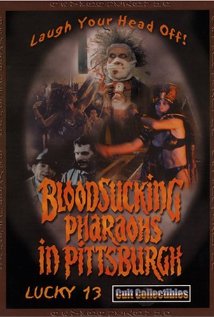 Bloodsucking Pharaohs In Pittsburgh... what more can you say? There's no sucking of blood, no pharaohs, and no... well, actually, the film is set and filmed in Pittsburgh so at least that part is right. Two hapless detectives, Sweeney Birdwell and Joe Blocker, are trying to solve a grisly series of murders involving women having parts of their body removed with power tools. Joe reveals that he worked on a case exactly like this one, back in Las Vegas, and with the help of the daughter of the man he worked with back then, they try to solve the case, only to learn that something much more sinister than murder is going on...
Advertisement:

This 1991 low-budget cult classic film keeps its tongue firmly in cheek as it invokes cliché after cliché of horror films and cop procedurals.