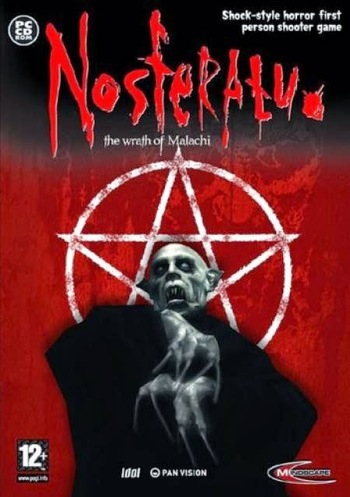 Nosferatu: The Wrath Of Malachi is a Survival Horror First-Person Shooter video game by the (since disbanded) Swedish developer group IdolFX, released for the PC in 2003.
Advertisement:

The game is set in Transylvania in 1912. The English fencer James Patterson has arrived late (10:30 at night to be precise) to Castle Malachi, where his extended family is gathered for the wedding of his sister Rebecca to the son of the Count who lives in the Castle. He finds the Castle completely deserted, until happening upon Father Aville, the priest who was to conduct the wedding. The severely injured Aville tells him that the Castle is the lair of an army of Vampires and the family has been lured there so the Count can sacrifice them in a ritual of dark magic. Armed only with his prized Cane Sword and the Father's Crucifix, James must explore the haunted Castle, rescue his family, and stop the Count's plans.

Don't be fooled by the subpar graphics, relatively simplistic gameplay, and occasional glitches - Nosferatu is still very much a horror game, and a hard one at that. The Castle is randomly generated, with room layout, items, enemies, and family members being different with every different playthrough. Keeping track of supplies and ammunition is essential, as is knowing what items to use in which situations. As you progress through the different areas, you will find family members, who you must lead back to the Sanctuary, where each one will give you a different item. Just try not to let them die along the way. And as the in-game clock progresses, they'll start being sacrificed unless you can reach them in time.

Monsters are a constant presence, as they can appear almost anywhere and any one can kill you easily, making strategy with regards to aim, movement, positioning, and reloading essential. Although the graphics may not be very good, (owing to the use of the by then 5-year Gold Src engine used to power Half-Life) the gloomy atmosphere and creepy ambient music combined with the hideous bloodthirsty beasts jumping out from around every corner will make even the most hardened gamer jump out of their seat at least once.

Nosferatu: The Wrath Of Malachi contains examples of: