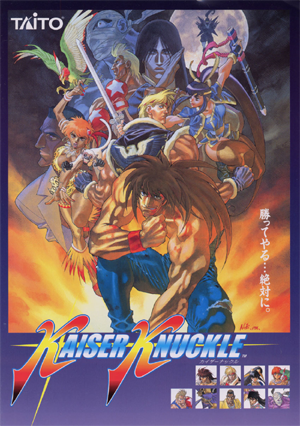 Can you achieve the victory in the Kaiser Knuckle tournament?
Advertisement:

Global Champion, known as Kaiser Knuckle in Japan, is a 1994 Fighting Game by Taito. It was released during the fighting game trend of the 1990s that began with Capcom's Street Fighter II. Despite the arcade game showing highly-detailed and unique content, it didn't catch enough attention to become successful and never got a home version.

These days, it's known for its legendarily difficult Final Boss. It has absolutely no connection to the weapon named "Kaiser Knuckle" from Chrono Trigger.