Film / Thou Shalt Not Kill... Except 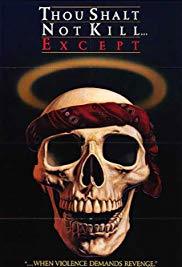 Thou Shalt Not Kill... Except is a 1985 American Action Genre film featuring Sam Raimi as the villain.

Staff Sergeant Jack Stryker is a Vietnam veteran who is trying desperately to lead a normal life. When an insane cult shows up, kills his girlfriend's father and kidnaps the girlfriend, all that falls apart. Breaking out a stash of weaponry he kept with him the whole time, Stryker calls up his buddies for a Roaring Rampage of Revenge.

It was distributed on DVD by Anchor Bay Entertainment.