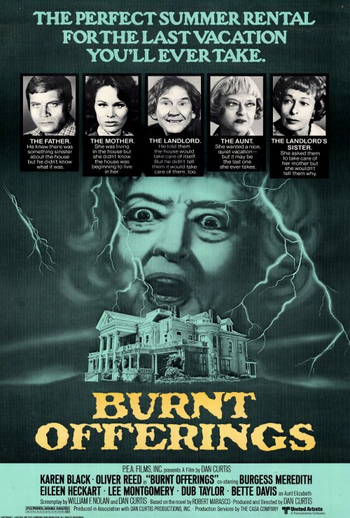 Burnt Offerings is a 1976 horror film adapted from the novel of the same name by Robert Marasco, directed by Dan Curtis and starring Karen Black, Oliver Reed, Burgess Meredith, and Bette Davis.

The Rolf family — Marian (Black), Ben (Reed), Davey (Lee H. Montgomery), and Aunt Elizabeth (Davis) — have rented an old, worn-down mansion from the creepy Allardyces, Arnold (Meredith) and Roz (Eileen Heckart). They've been told that the only condition to renting the house is that they must care for the elderly Mrs. Allardyce, a recluse who collects photographs.

Marian quickly warms up to the house and decides to take care of Mrs. Allardyce herself. However, things start going wrong almost immediately. Ben almost kills Davey while roughhousing in the pool, Marian's temper starts flaring at the mere criticism of the house or Mrs. Allardyce, and Ben starts having nightmares about the chauffeur from his mother's funeral. After Davey almost dies from carbon monoxide poisoning, Elizabeth starts getting suspicious about the house's nature, but dies from mysterious circumstances the next night.

Ben soon finds out that the house has the ability to regenerate whenever someone dies or has an injury. Realizing that the house is eventually going to kill them all, Ben tries to take Davey and flee, but the house, and Marian, won't let them get away so easily.