Literature / It's Kind of a Funny Story 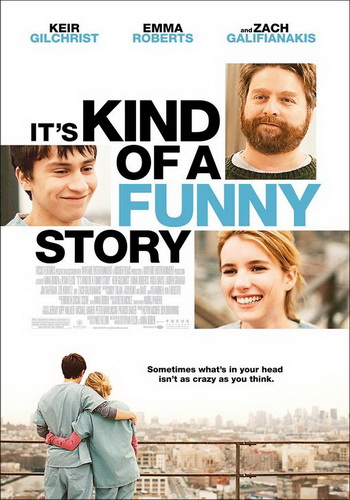 It's Kind of a Funny Story is a 2006 Young Adult novel written by Ned Vizzini.

The story centers around Craig Gilner, an ambitious, pot-smoking teen, who gets in over his head when he applies and succeeds in getting into the Executive Pre-Professional High School, and he spirals into depression and eventually suicidal thoughts. He has trouble eating and sleeping. He eventually plans to commit suicide because his life is spiraling out of his control with his best friend dating his crush and him failing school. Craig calls the suicide hotline and the rest of the story starts from there.

From there a slight suspension of reality is needed, as he is put into the adult ward of a mental facility because the teen ward is being renovated. And what's more, he has to stay there for a minimum of five days straight. Craig soon realizes that the people in here all have real problems. As you can probably see, it's kind of a funny story.

Made into a film in 2010, directed by Anna Boden and Ryan Fleck and starring Keir Gilchrist as Craig. Also in the cast are Emma Roberts, Zach Galifianakis, Viola Davis, Lauren Graham, Jim Gaffigan, and Zoë Kravitz.

Alternative Title(s): Its Kind Of A Funny Story