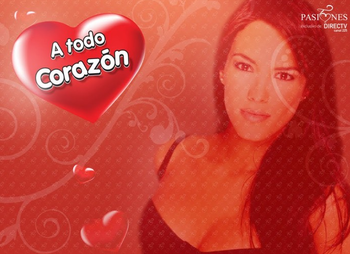 A todo corazón (Spanish for "At Full Heart") was a popular Venezuelan teenage-oriented Soap Opera that aired in 1997. It revolved around the adventures and misadventures of a group of students of a private High School named "Los Próceres", their families and their closest friends, the Central Theme usually being the mistakes they make and their consequences.
Advertisement:

Considered one of the most successful series in the late 90's, it essentially became the teenaged equivalent of Carrusel and it was broadcast in several parts of Latin America gaining a lot of popularity amongst the teenage viewers of the time. It marked the Star-Making Role of several of its actors, such as Adrián Delgado, Lourdes Martínez, Gaby Espino and Juan Alfonso Baptista.

A remake, titled "A puro corazón", started airing on September 2015.