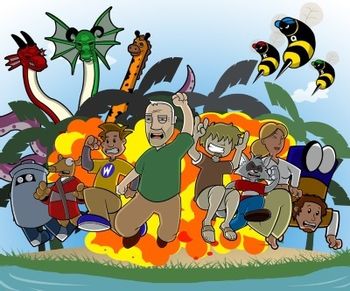 The series started on Newgrounds in 2003, and ran all the way to 2009, when production was halted. Having a humor style similar to Family Guy, Waterman has had nine episodes produced, along with a short series of Fractured Fairy Tales called Puppets in the Park and a few guest appearances on other animated web shows. The entire series was produced through Waterman Studios HD and used music by Reel Big Fish.

A movie, appropriately titled The Waterman Movie has been in Development Hell since 2007. The planned film is notably the last acting role of the late Leslie Nielsen, with all his lines being recorded before his death in 2010. No information on the film's production or release has come up since 2011.