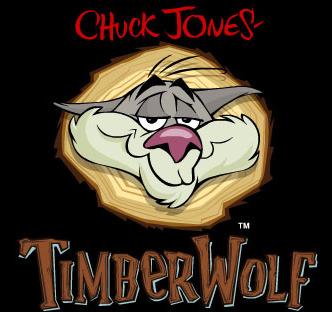 At the dawn of the 21st century, Chuck Jones decided to show the rest of The Internet how a real animator makes Flash cartoons.

TimberWolf follows the exploits of one Thomas T. Wolf, who is trying to go one day without a tree falling on his head. It also chronicles his interactions with other woodland creatures, particularly his nemesis, Earl Squirrel.

While Jones created the character, he left production and direction largely to his last protege, Stephen Fossati (who produced Jones's work in Mrs. Doubtfire and directed Father of the Bird). Thomas was voiced by Joe Alaskey, while Earl was voiced by Nancy Cartwright, who both later worked on Rugrats. Riders In The Sky wrote and performed the theme song.

Thirteen episodes were produced, with production ceasing altogether when Jones died in 2002. The front page for the series at Warner Bros. is still on their website, but with nothing else. A fan gathered the Flash files and published them on a different web page