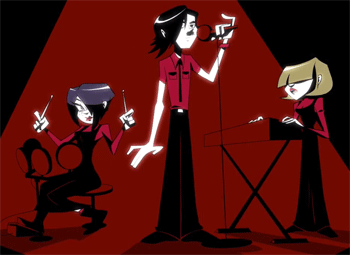 From left to right: Kandi, Roscoe and Evangeline.
Advertisement:

" note (weebls-stuff link not available for Spelunker, the link is a direct YouTube link to the video on Mr. Weebl's channel), each accompanied by Flash-made animated music videos created by Picking and Peabo. All tracks are available as iTunes singles.

A full album: Red, was released in mid 2014 after a successful Kickstarter campaign. It not only collects the singles together for the first time with re-recorded vocals, but also features three new songs, Android, Girls and Spelunker, plus five new remixes.note Well, four remixes and a instrumental violin cover of "Wandering Eye".

was produced and released with funding from Kickstarter. One backer will get to be featured in a music video. Additionally, Weebl voices the singer in TheLivingTombstone's remix of Epoch

with Savlonic specifically getting the credit.

A third album titled emulat0r was put together in the time span of 3 weeks in September 2017 after they asked in a Facebook post what covers fans would like to see them perform. Turns out they were really into the idea of a Cover Album of tracks like "I Ran", "Sweet Dreams (are Made of This)", and "Fasion is Danger".