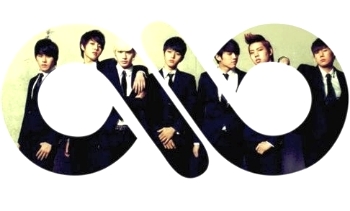 Hello, we are INFINITE!
"Our name, INFINITE, means 'limitless'. We never put a restriction on our possibilities, and we will always improve."
— Sungkyu
Advertisement:

The boys were Woollim's first attempt at an idol group, due to the need of a dire source of income at the time, and bringing them out into the scene almost bankrupt the company. Worse was that they met little success. It wasn't until the year 2011 that they pulled a break through with their comebacks. Working their way from the bottom to the top, they were recognized for their impeccable synchronized dancing and popularized the common knee float move by impressively incorporating it into their choreography with their song BTD; the part in particular is now dubbed as the "Scorpion Dance". They hit it big with Be Mine, landing them their first music show award, and it was an uphill climb from there on.

Taking advantage of the momentum, they continued with Paradise, and then 2012 saw the release of The Chaser. Critically acclaimed, it landed first on Billboard's "20 Best K-Pop Songs of 2012". With their fans increasing and popularity expanding at a quick rate, they are slowly ranking as one of the top boy groups in South Korea, able to match numbers with bigger names in the industry, and becoming a force to be reckoned with.