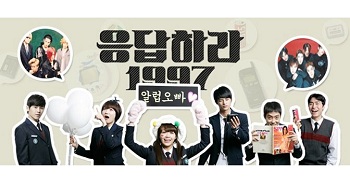 The series begins in 2012 with our heroine Sung Shi-won at her Busan high school reunion, where one couple is about to announce their marriage. From there, the drama skips back and forth in time from 1997 to 2012 to follow the adventures and misadventures of the extreme H.O.T fangirl Shi-won, her family and her group of high school friends. Comedy, hijinks and lots of heartwarming moments ensue.