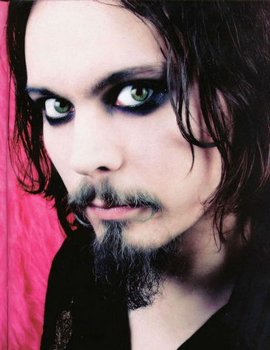 Makeup has existed for a very long time, to hide imperfections, but also for ritual and religious purposes. In Ancient Egypt, both high-class men and women would wear eyeliner and nail polish to protect themselves against curses (and flies, and the glare of the Sun). In the court of Versailles, everyone was in thick layers of make-up and perfume (mostly to hide the smell).

Nowadays, makeup is considered a mostly feminine thing to wear, and men only wear it for cultural reasons, as a fashion statement, or if they're on stage.

In fiction, makeup on men can be an indication of religious figures and generally mysterious dudes. Since Makeup Is Evil, it is also worn by insane psychopathic clowns or people with a screw loose, or the more emo-tastic brand of Bad Boys. It also acts as a fetish; just ask any fan of Jack Sparrow. In recent decades, it notably gained a reputation as part of the look in Emo and Goth subcultures, among others.

Leaves one prone to Your Makeup Is Running.